Feeding good-quality colostrum to newborn calves within the first hours of life is critical to their health and success. Colostrum can be delivered to the calf by one of two methods: esophageal tube feeder or nipple bottle. Tube feeding is typically considered as a more time-efficient method, as it only takes a matter of minutes to feed a large volume of colostrum. In contrast, feeding colostrum through a nipple bottle takes more time, yet it is considered “more natural” as it is mimics the calf suckling from the dam.

Although tube-feeding is a time efficient method, there is concern that feeding colostrum via tube may result in colostrum entering the rumen, which would delay the delivery of colostrum to the intestine. In particular, two previous studies suggested that colostrum might enter the rumen when using a tube feeder, as tube-fed calves have lower blood IgG concentrations than calves fed with a nipple bottle (Kaske et al., 2005; Godden at al., 2009). However, these studies did not actually measure the “abomasal emptying rate,” which is the rate at which the meal empties into the intestinal tract from the abomasum. Moreover, although there is an abundance of factors that may be affected by colostrum feeding method, previous studies have only focused on how feeding method can affect IgG.

With these large knowledge gaps to fill, researchers at the University of Alberta sought out to determine if feeding colostrum with an esophageal tube would affect abomasal emptying rates, as well as blood IgG, glucose, insulin, and gut hormone (glucagon-like peptide-1 (GLP-1) and GLP-2) concentrations compared to calves fed colostrum through a nipple bottle.

In order to conduct the study (Desjardins-Morrissette et al., 2018), twenty Holstein bull calves were either fed 3L of colostrum through a nipple bottle (BOTTLE calves) or 3L of colostrum through an esophageal tube (TUBE calves). Regardless of the feeding method, both groups were fed the same colostrum (Headstart, SCCL, delivering 200g of total IgG) at 2 hours of life. After the colostrum meal, calves were fed 3L of pasteurized whole milk at 12 hours of life via nipple bottle, and every 12 hours thereafter. In order to collect frequent blood samples after the colostrum meal to estimate abomasal emptying rates, as well as blood IgG, glucose, insulin and GLP-1 and GLP-2 concentrations, a jugular catheter was inserted at 1 hour of life.

It is also important to note that high-quality colostrum was fed in this study. In particular, each calf received 200g of IgG in a 3L feeding, which is well above the minimum recommended amount (100g). It is unknown whether feeding colostrum of varying quality may have affected the results observed in this study. Regardless, the authors suggest that if an adequate volume of good quality colostrum is fed and if tubing is done properly, then both tube and bottle-feeding calves colostrum should result in adequate passive transfer of immunity.

Tube-feeding colostrum to calves increased both the glucose and insulin area under the curve (AUC) compared to calves that were bottle-fed colostrum (Table 1). All calves were fed the same colostrum, and thus the same amount of lactose (~2.7%, Godden et al., 2009) and glucose. Therefore, if this difference is not due to feeding different amounts of glucose, then it is likely due to tube-fed calves consuming their colostrum meal in less time (5.2 min) than bottle fed calves (17.6 min) (Table 1). In cattle, it has been demonstrated that 30% of glucose is utilized in the small intestine, while the remaining 70% is digested and appears in the blood (Richards et al., 1999). Since TUBE calves consumed their colostrum in less time, the initial time colostrum entered the small intestine was sooner. This could have resulted in more glucose entering the bloodstream and less being utilized by the small intestine. As a result, TUBE calves had higher glucose and insulin concentrations.

Prior to this study, blood concentrations of GLP-1 and GLP-2 have never been reported in newborn calves, let alone in response to colostrum feeding. Although no treatment effect was observed for GLP-1 and GLP-2, a significant time effect was seen after the colostrum meal (Figure 1). GLP-2 is known for stimulating gut development (Taylor-Edwards et al., 2011), while GLP-1 has been shown to increase blood insulin concentrations in calves, which results in the uptake of glucose for energy use (Fukumori et al., 2012a). Secretion of these hormones from the small intestine is stimulated by nutrients, such as lipids and carbohydrates (Burrin et al., 2001), and thus feeding colostrum can initiate their secretion in the immature neonatal calf gut. Therefore, although no treatment effect was observed this study suggests that colostrum could have beneficial effects on the gut development of the calf through the action of these gut-peptide hormones.

No differences were observed in abomasal emptying, blood IgG, GLP-1 and GLP-2 concentrations when calves were fed 3L of colostrum via an esophageal tube-feeder or a nipple bottle. Yet, tube-feeding calves resulted in higher blood glucose concentrations and consumption of an increased amount of the first milk meal compared to bottle-fed calves. These results may have occurred due to tube-fed calves having less glucose available as an energy substrate for the small intestine, but warrants further research. 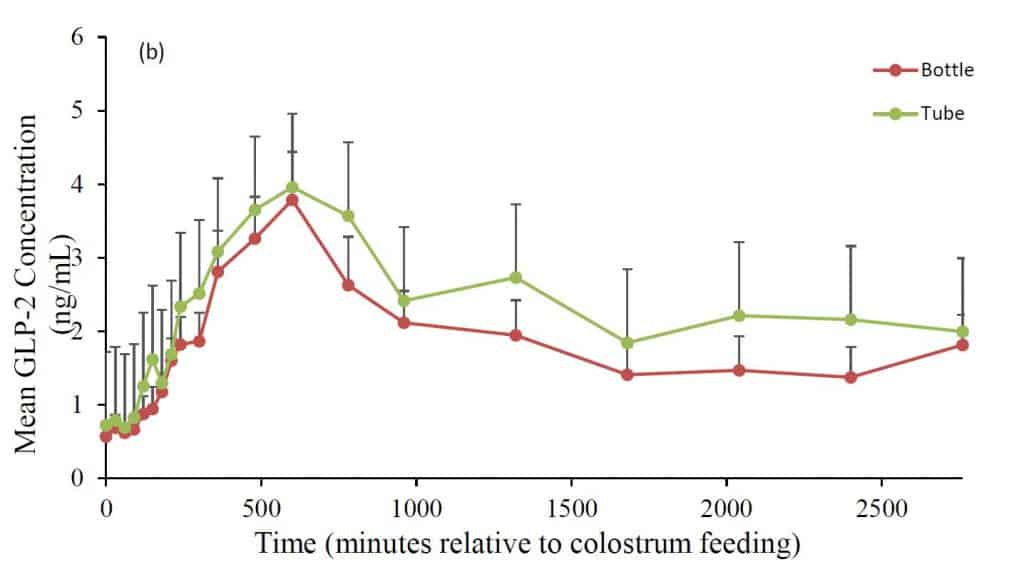